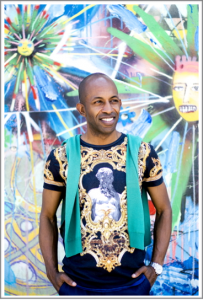 Pedro Jermaine Perry, a native of Live Oak, Florida was born on March 29th, 1979. He is the First Vice President and resident artist of The Real Rosewood Foundation, Inc (Gainesville, FL). He is also the resident artist to US Congresswoman Frederica S. Wilson, Three Rivers Legal Services, Inc., Plato Academy (Tampa, FL) and Pink It Up! / Morton Plant Mease Foundation. For seven consecutive years, he has served as the headline artist for the Annual MLK Commemorative Celebration for Florida International University (Miami, FL) and was the former resident artist for the United Nations Educational, Scientific and Cultural Organization – Transatlantic Slave Trade (UNESCO-TST), Florida. He works closely with Miami-Dade County Public Schools to promote the arts as well as preserving African American History and Culture. Miami-Dade County Public Schools celebrated him as the featured artist for Black History Month in 2013 at the age of 33. He also works closely with the Gainesville, FL Chapter of the NAACP. In August of 2018 at the 6th Annual Rosewood Black Tie Dinner Show he unveiled his tribute painting to the history of Rosewood titled Hope Prevails, before an audience of community leaders and elected officials.

In December of 2018, Pedro Jermaine was the featured artist for the inaugural Arts in The City Celebration which took place in Liberty City, Miami. His tribute painting to the history of Rosewood, FL (Hope Prevails) was celebrated by the local community. He was honored alongside other local artists, community leaders and Musicians including Grammy Award Winning Artist Betty Wright. The goal is to promote arts and culture in Liberty City.

Pedro serves as a mentor for Congresswoman Wilson’s 5,000 Role Models of Excellence Program. He is an affiliate of the Gateway Art Gallery in Lake City, FL and Spokesperson/Mentor for Hands of Change youth organization (Lake City). His works have been used to tribute and honor local historical figures and nationally renowned individuals and groups including, Civil Rights Leader Thomas A. Wright, Ilyasah Shabazz (daughter of Malcom X and Betty Shabazz), U.S. Congresswoman Frederica Wilson and The 5,000 Role Models of Excellence, Rev. Martin Luther King Jr., and the United States Air Force Thunderbirds.

His reach and impact have been vast expanding into education/ history, health, legal and leadership. Through his ability to connect with others and find common ground for change he has changed the perception of what is possible through the arts and truly living up to his motto “Passion for Artistic Excellence”.